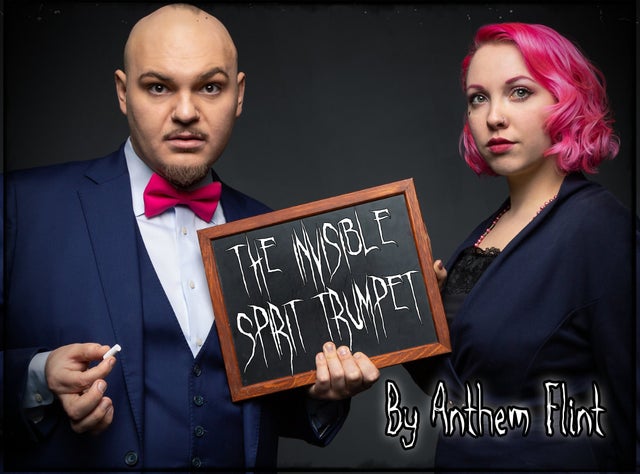 The Spirit Trumpet: a classic tool of seance work made new! The trumpet now becomes invisible to your spectators and will be your new favorite covert device! Make things float, produce ghostly voices, cause the noises of a drowning ghost to permeate the room, make spectral wind that your audience feels, and more!

A word from Anthem

I remember when my piano teacher gave me a copy of Dunninger’s Complete Encyclopedia of Magic. I was stunned... Are you telling me that my piano teacher has a book that contains all the secrets of Magic?

I was young at the time and marveled at the secrets within the book. Wondering if one day I could do those tricks.

Later, I discovered that the book was released in large quantities and to much of the public and many of the illusions within were red herrings designed to throw you off how he really would achieve these tricks and some of the tricks were never even performed at all!

However, some of the methods were very usable and I was enchanted by two pages that illustrated the use of the spirit trumpet in seances!

The idea to me was brilliant. I wanted to make a ghost, dead by drowning, blow bubbles in a bowl of water. As well as project spectral voices into the air!

Despite seeing this picture as a child, it wasn’t until several years ago that I decided to make such a prop after seeing the perfect building blocks for it... However, I still never used it till this year. Boy, do I wish I used it earlier!

This trumpet not only projects spectral voices and blows bubbles in bowls of liquid, but also works as a reaching tool. I used it to make a wicker ball float in the air, it was one of the most terrifying parts of the seance.

*The trumpet is never visible to the audience, there is no evidence of how the spirit phenomenon took place!

*Easy and inexpensive to build from supplies you can find online or at a hardware store and a party store.

* Limited by your creativity, there is so much potential for spirit effects! Spectral voices and wind, spirit touches, levitations, and more!