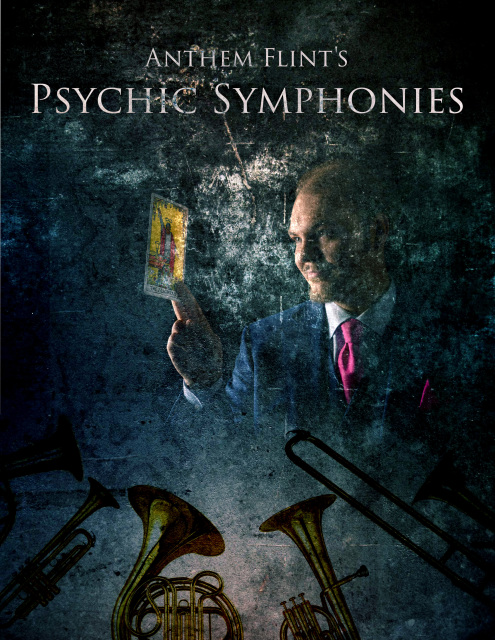 What are you chasing? When you look at your show, are you leaving an indelible impression on your audience or just impressing them? Finally after years of waiting, Anthem Flint releases his personal routines that accomplish both.

Anthem is known for his Empowertainment and ability to remind audiences of their own inner power. This book will show you how to achieve this for your audiences and leave them smiling. But there is more than just motivational magic...

Inside you’ll find the inner secrets of...

The Second Sight Act: how to develop, practice, and perform this act with a partner.

Musical Mind Reading: Anthems tossed out deck that allows you to reveal thought of songs in a way that shows off your talents! This method is very flexible!

Spectator as Mind Reader: Anthem revisits pendulums with his Broken hearts principle, his classic card effect 1 in 52, and something new for the stage that packs small and plays huge!

The Wish Q & A: Anthem’s work on the Burling Hull card and using wishes instead of questions. Learn how to perform this act solo or with a partner. Anthem is renown for his work on Q & A, don’t miss this release!

The Spirit Trumpet: a classic tool of seance work made new! The trumpet now becomes invisible to your spectators and will be your new favorite covert device! Make things float, produce ghostly voices, cause the noises of a drowning ghost to permeate the room, make spectral wind that your audience feels, and more!

Power Words: Anthem’s system of 9 words that will make learning hypnosis and suggestion a breeze!

Hypnopush: gently push over your spectator without touching them! It’s like using the force!

Anthem wanted this release to feel like you’re jamming with him at a convention. That’s why he reveals what has been happening in his life. The massive changes that made him a better person and performer.

Thank you for joining me on this exploration of the Power of Mentalism. I mean power quite literally as mentalism is a force to be reckoned with. It can not only amaze, inspire, and delight… it can also terrify, shock, and change others perceptions of the world around us.

These lecture notes will primarily focus on the entertainment aspects of Mentalism and my own routines, but as with much of the work in Mentalism, it’s not the routines that are special, it’s the small touches that transform it from simple mental magic to psychic entertainment. The little psychological subtleties as Banachek so wisely put it.

I’ll be touching on many topics including Two Person Telepathy, Spectator As Mind Reader, Pendulums, Q & A, Readings, Seance, and Hypnosis and Suggestion.

None of what I say is the end all be all of Mentalism, and there are as many approaches to mentalism as there are mentalists. What I can offer is my personal pet routines and the lessons I’ve learned doing these routines for all kinds of audiences.

If you aren’t familiar with my work I’ll run you through it.

I got involved with mentalism at 12 and was bombarded with a sea of comments from the local magic community like. “Mentalism isn’t believable unless you’re older!” Which I actually noticed the opposite of at times…. I performed at festivals, fairs, haunted houses, and birthday parties for many years striving to be like the giants on whom’s shoulders I was standing. I constantly tried new things until I found my strongest suits. I polished my craft further until my confidence was such that I released a DVD on Q & A at 16 or 17. I expected some backlash because of my age, but was met with far more excitement and praise then I expected. I further released my first book, Pendulums, and my second DVD, Close-Up Q & A. These were both hits at the conventions that I would exhibit at. I released several downloads and a few other DVD’s and then I stopped.

I had a life changing experience that devastated me. I decided to quit Magic and Mentalism and go into Real Estate. It took me only a few short months to realize I had to do magic again… but it took much longer for me to get past the feelings of unworthiness, of being an imposter, and the lack of confidence that I was experiencing.

I’m still healing, but I finally released another project, got my performing career back in swing, and now I am writing these lecture notes for you.

Why does any of this matter?

I want to stand as a reminder that Magic and Mentalism is something that you can fall in love with. Something you can give your whole heart to, and sometimes that means it breaks your heart. However, Magic is a restorative and healing art in so many ways and I’ve learned that no one should feel unworthy of doing what they love. Even if it is just for themselves, or perhaps friends and family, because everyone deserves the pleasure of experiencing true mystery and awe and we have the elysian pleasure of bringing that into the lives of those we touch.

With that in mind, the mentalism in these lecture notes is, to me, medicine. It can truly heal you and others, but only if you make/let it. It’s up to you what you do with these routines, so do something truly magical.